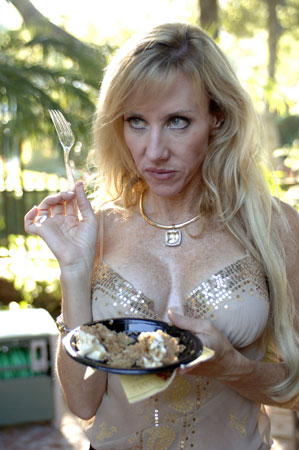 Some heartbreaking revelations are coming to light about credit card & payday loan providers that have been charging members of the US military unbelievable amounts of interest. I heard a local congressman say the highest rate was AN EXTRAORDINARY 451%!!! That’s so beyond-beyond it would make a mob shylock blush!
The soldiers are usually green young guys w/ not much education–FACING THE VERY REAL POSSIBILITY OF GETTING KILLED OR MAIMED. Many of the recruits have new families & MONEY IS A HUGE ISSUE!!! Because the richest country in the world didn’t provide it, some have been saddled w/ extra financial burden after choosing to

They soon find out the money isn’t free & some can’t be deployed because of their debt. Some have ended up bankrupt, even homeless! Bush recently made the grand gesture of capping the interest rate for servicemen at a still exorbitant 36%!!! Not exactly prime. Check out James Scurlock‘s movie, MAXED OUT.

Back to bread & circuses of the late Anna Nicole Smith’s baby’s televised paternity case. Will we all sleep better knowing Larry Birkhead is Dannielynn’s daddy? Did you notice Birkhead looks exactly like her late son, Daniel–while Howard K. Stern bears a striking resemblance to the other Howard Stern, King of All Media??? My bet is these two will join forces in the fight to get BIG $$$$ from the J. Howard Marshall estate (the octogenarian Texan billionaire she married early on). Stay tuned….