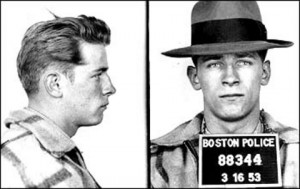 The Mickey Cohen of Boston, James “Whitey” Bulger, 81, legendary fugitive mobster, has just been apprehended – after more than 15 years on the lam & an international manhunt. Whitey surrendered at his rent-controlled apartment, 3 blocks from the Pacific, in pricey, pristine Santa Monica, a star-studded beachside community in Los Angeles. Offering $2 million bounty, the FBI had just began running TV ads about him, but not in the LA market! In the apartment, his digs since 1996, authorities found  inside the walls more than $800,000 cash, 30 guns, assorted knives and forged documents. Whitey’s story, like the story of L.A.’s own brazen and outrageous underworld boss Mickey Cohen (which may be read in my forthcoming book, MICKEY COHEN: THE LIFE AND CRIMES OF L.A.’S NOTORIOUS MOBSTER, coming May 1, 2012) is amazing. While Whitey ruled Beantown for a generation, his brother politician BILLY BULGER– with whom he shared a very close and well known relationship – was one of the most powerful figures in Massachusetts politics (Kennedys and John Kerry kissed his ass!!!)

Whitey is infamous not only for his murderous ways, prominent brother, but also for being a top FBI informant -while having a personal FBI agent on payroll. The 2006 film, The Departed, directed by Martin Scorsese, was a prosaic (with changed names) version of his story, but is worth seeing for the performance of incomparable Jack Nicholson as the Whitey-ish mobster. Many non-fiction books have been written, but the one I love is The Brothers Bulger by Howie Carr. An outstanding read, you get the true story of both the mobster and his equally fascinating brother!

For 76-yr-old Roman Polanski, legendary director of the macabre and neo noir classic, Chinatown, a nightmare has returned. In an incredible turn of events, the man once known as the husband of the most high profile Manson family victim (his heavily pregnant wife, actress Sharon Tate, was slaughtered by the heinous cult), has just been arrested in a Zurich airport–as he arrived to collect a lifetime achievement award.

Accused in 1977 of sexually assaulting an underage girl–the Tinseltown hopeful was handed over to Polanski by her mother. Polanski took her to Jack Nicholson’s house for a photo shoot, that culminated in what was alleged to be a sexual assault. The Academy-Award winner (Best Director for The Pianist–in absentia) fled LA just before sentencing. He has been living all these years, exiled in Paris. I know Polanski, and hope this great artist is finally left alone. The current DA, Steve Cooley, is using this old, but still high profile case, to garner publicity to win state office. The victim has long ago dismissed this old news: why can’t the politicians and press?

While Detroit’s The Big Three auto-makers are begging for a multi-billion dollar bailout, Jack Nicholson might be wondering what took them so long?! Jack got rid of gas in 1978, anticipating the Green Wave by almost 30 years. Check out this video: